Still here, still finding my way. I was away at a conference and busy with school, but I see it's been a month since I posted. It's so unlike me, this silence!

Recently I had written about going to meetings. I think the program is great, and I see the benefit of it. But, for now anyway, it's not for me. I tried for a month, and honestly, though I had some moments of feeling connected with people across the room, I mainly felt alienated and isolated. Now I know, I know, I may be bringing that on myself. But I am me, and I don't think I can just become someone else to make something work out for me. I am a big fan of trying on new perspectives to see if I can take up new ways of thinking and being. But I have a strong sense of when it feels more like fakery than a new way of thinking, and that's how I was feeling with the meetings.

There are a few things behind this, I think. Nearly everyone there spoke about how they came to a meeting out of sheer desperation. And I don't feel that these days. It's as if I missed my window there, when I could just be open and desperate and maybe connection would flow. People who came in looking desperate seemed to have people flock to them. But that's not my situation these days. Many people at the meetings seemed to know and like each other, so there was warmth and hugs and hilarity shared among them. Others, like me, came in and sat and left with almost no interaction. But what I didn't see was how to cross that chasm-- how to get from being isolated to being included. The last meeting I went to, I had made a deal with myself that I would talk to someone there, and I did. But it wasn't welcomed, and the person turned back to someone else right away after I introduced myself, obviously wanting to talk to someone she knew already and not a new person. It was a bit like high school for me, in the worst kind of way. I hear stories of warmth and acceptance and I know they exist. But that wasn't my experience.

I don't know. After a while, I was feeling more like an ethnographer than I was like a person. That's not fair to the other people in the room (who are people in their own right, not interesting specimens) but it's also not fair to me, because it removes me too much from my own experience. I've had enough alienation in my life, ad I don't intend to court more of it. Also, I had that classic thing people talk about, feeling like I am not as bad off as the people who told their stories, and I am therefore some kind of impostor. I know, the point is I'm supposed to focus on the similarities and not the differences. And I did. But I can't check my critical thinking at the door, and I can't help but see that there are many differences as well as many similarities. It's not that I think I'm a better person because my situation is different than others. But the "not yet" argument doesn't help me, either. I know things could have gone differently for me. They could yet. I have met many people who suffer(ed) from many different kinds of addiction and abuse and homelessness. I think it might do a disservice to me and to them to say that we are dealing with essentially the same problem. I may be wrong about this. But it's where I am these days.

Also, at meetings, the stories were often told in a way that was designed to entertain the audience. As you know if you're reading here, I resist the impulse to frame my thinking in an entertaining narrative. I could go on about lots of dramatic things that have happened to me, and link them to my drinking, but I'm not sure they're all related, to be honest. I think many people get a lot out of stories that talk about how bad things were. Frankly, I never read them, and I avoid telling them. And I don't want to start, either.

But there's another thing too, and I want to say that clearly for myself if for no one else. I have been very much supported by the blog world--in writing and reading and participating in ongoing exchanges with people I have come to admire and care about deeply, all online. And that's real life, too. I wonder whether I have been deprecating that a little in my (admittedly small) attempt to find an in-person community. Yes, I need real people. My (truly wonderful) partner has been with me in this since the beginning, and he gets this addiction/alcoholism thing as much as anyone can, though it's not a problem he deals with himself. I've also told a few friends and my sister, and they have been supportive and helpful. I get that you have to give it up a bit to get people onside, so I have told some people how things were for me, and why I quit, and how it's worked. But I've done that sparingly. I don't want to be defined by it, any more than I wanted to be defined by other problems I've faced in my past.

This morning, on another blog, I saw a comment that said something like, "Blogs are nice but they don't keep you sober." I appreciate that the comment was made in a different context, and I didn't want to weigh in with my opinion in a place that it would not be appropriate. Just the same, here on my own blog, I want to respectfully disagree with that sentiment. Blogs are more than "nice." By fully participating in this blog world, I have got sober and stayed sober for 14 months and counting. Part of this success may be that I'm highly imaginative, so I have no trouble thinking of the people who blog as real people, just as I often think of book characters as real people. Part is luck, maybe. Part of it is being analytical. I look at what has worked for people and try those things, and I look at what doesn't work and note those. I see that different things work for different people, so I try things out and see what works and keep on with those practices, and I keep trying to find new ways of thinking and doing. I really do think this getting and staying sober isn't something I could have done or could do alone. But I also really don't think I am alone here when I'm online. You're all here too, sometimes reading and commenting, sometimes writing other posts that resonate with me or linking to something I've said that opens up new ways of thinking and being for you and for me, too. I love that. So maybe this post is just to stand my ground here and say, actually, blogs are real life too, and yes, they can get you sober and keep you sober. They might not work for everyone, and of course it makes sense to keep trying new things to see what works. But they can and do work. I am sitting here in my living room wearing a stripey shirt and jeans and blue woolie slippers, sipping tea and typing. Today I went to the farmers' market and the butcher shop, and later I will do a whole lot of reading for school, and then go for a long walk. I guarantee you, I am real. And I am sure if you're reading, you're real, too. (Unless you're a clickbot. If so, hello clickbot! Welcome!)

That said, I really am trying to find ways of being with people, so I'm trying a few other things. I have joined with some people in starting an academic reading group, and that's another whole new way of learning to listen to people and listen to currents in the room. So far that's been going well, though it's a challenge. Also, after having declaimed against meditation, I signed up for a zen training class, as I see that might be a way for me to practice deep listening in a different context. I'm up for trying things. But I wanted to write this to make the point, for myself, and for anyone else it might help, that what I'm doing is actually working, and it does seem to work for some people. Not for everyone. None of us is everyone. But we are all someone.

In the spirit of keeping it real, I thought I'd share a real life picture I took yesterday, evidence of other real folk out there. Looks like some badass sober tagger has been hitting the streets! This made me smile: 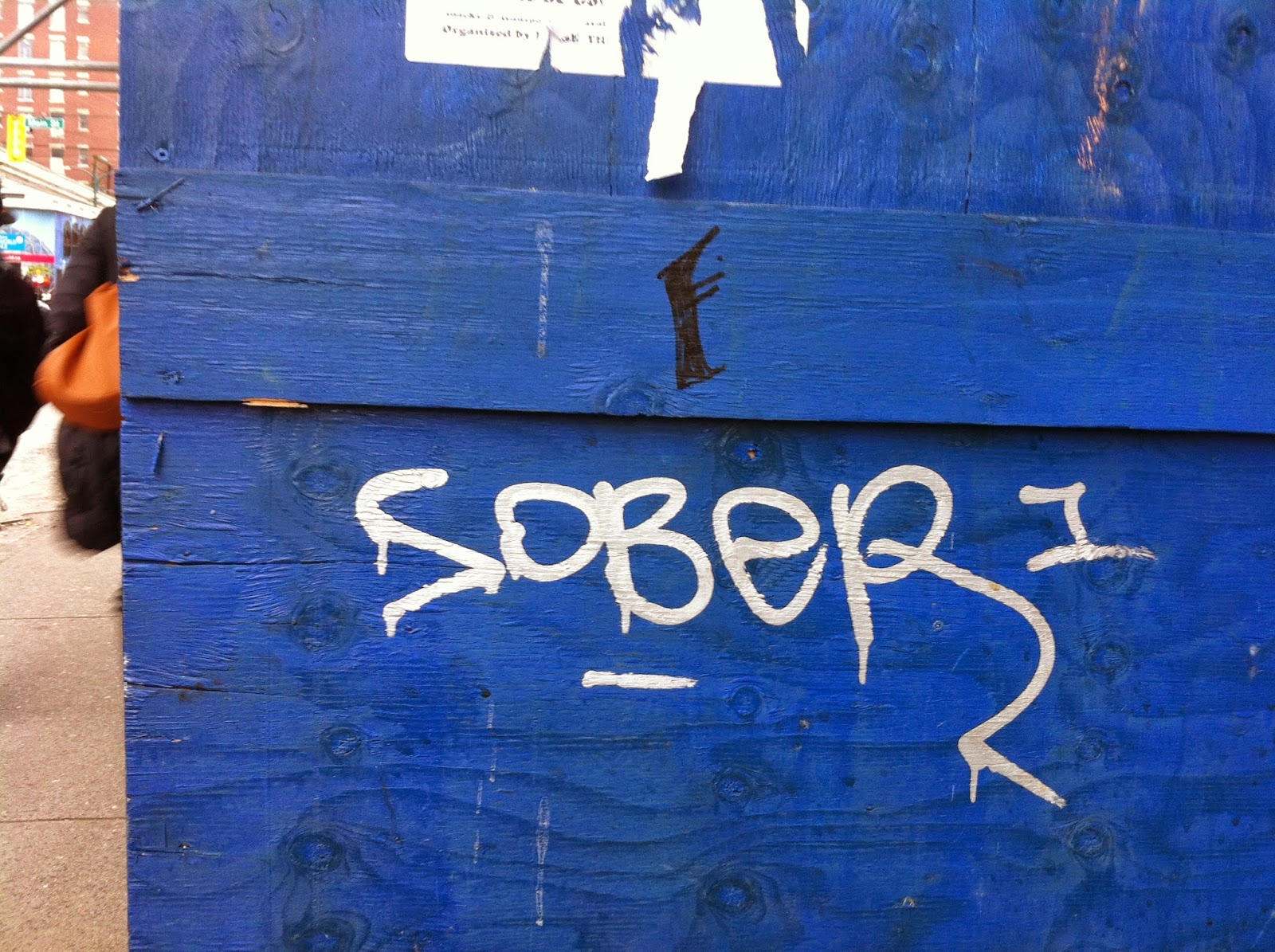 Peace and love to you all, bloggers and readers and meeting-goers and everyone else. And you, too, you lovely sober taggers! Thanks for reading, and thanks for being here.