Today is my 21st day of signing off alcohol, and I feel fantastic. I am sleeping a solid eight or nine hours a night, and what I thought of as an ever-present nagging anxiety seems to have receded. It's not gone, but it doesn't take up quite so much of the mind-space.

It's been sunny and warm here, and though I would love to go to the beach for a swim today, I have a paper to write. Instead of biking to the ocean, I've been standing in my living room, feeling a slight breeze from the open window, sipping a chilled dandelion, lemongrass, lemon balm tea, working on a tough but interesting paper. The class has been interesting, and the paper is due in a couple of weeks, so I have to get on it. And that's not so bad. My usual black-and-white thinking seems to be shifting, and I am about a thousand times calmer. In fact, I usually only get things done by funnelling the anxiety and terror into a ferocious drive that leaves me altogether burnt out. And today I do have an inner voice telling me that without that tension, I will be lost and disoriented and never meet a deadline again. (But I'm talking back: "Hello, monkey brain. Welcome. Have a seat and jabber, I'll listen later. Right now I have to get to work. Yes, over there on the couch is fine, thanks. No you can't have a glass of wine while I get started. Cup of tea?")

Instead of being driven by anxiety, I'm going to see if I can use the Anne Lamott "Bird by Bird" method. But first, I will remind myself that I can and will accomplish things while sober:

Yesterday, I had a small success in starting and finishing what was, for me, an ambitious project. I made raspberry sauce and canned it so we can taste the sunshine when the grey days come. And I made a jar of raspberry cordial, adding to the number of tasty, non-alcohol drinks I've figured out how to make. (I'll do a post on those another day, because there is so much to drink besides booze. I had no idea!) Without ever having made raspberry sauce or cordial, and with only one vague memory of canning preserves around fifteen years ago (I followed a recipe precisely, and I burned by arm), I wasn't sure what to do. But I googled recipes, called my sister for advice, made three trips to the store for jars and supplies, and leaned a little on my partner for moral support when I was a little scared of the big pot of boiling water. Here's the result: 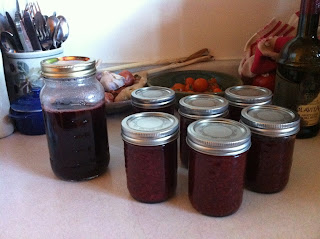 I know I'm not a great photographer. But imagine the taste! I'm calling it seven jars of sunshine. I'm proud of myself for getting it done. If I were still drinking 1-2 bottles of wine an evening, I wouldn't have had the time or the energy, and I might not have been able to afford the canning supplies! So I'm proud of myself for this, a sober accomplishment. I'm tempted to say I would like to bottle the good feeling, but I think the trick is to do the opposite, just take the feelings as they come and then let them go. I'm giving that a try, though I suspect canning raspberry sauce is a little easier.

OK, I'm off to write that paper. Happy sober days and nights to you!